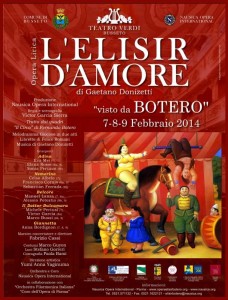 Curiosity – Here a sentence written by Felice Romani, author of Elisir libretto: “The subject is reproduced by Scribe “Filtro”. It is a joke; and as a joke is presented to the kind reader”…Felice Romani. As the legend goes, Gaetano Donizetti had fifteen days setting to music the Elisir d’amore, a comic opera described in score as “playful melodrama”.

It’s an half-serious genre or a sentimental comic one and it plays as a comedy and idyll, not a drama. In very little times worked too the libretto author Felice Romani, who took up the text from an other libretto, Le Philtre, signed by Eugène Scribe for Daniel Auber, and in his turn grew out of the italian comedy “Il Filtro” by Sandro Malaperta. 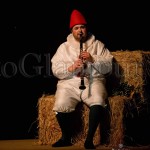 The opera seduced Milan in her opening night the 12th May 1832 in Cannobiana Theatre. The outcome of the opera is a sentimental dimension combined to perfection with the comic sense, giving her sweetness and strong emotional resonances, realized in the most famous page: the Nemorino romance “Una furtiva lacrima“.

“With the Elisir d’Amore, Donizetti seduced Milan in 1832 and marked the development of Rossini model across the introduction of the sentimental element in the comic opera”.